THELMA ADAMS is the Contributing Editor at Yahoo! Movies. St. Martin’s Press published her debut novel PLAYDATE, an O magazine pick. She was the film critic at Us Weekly from 2000 – 2011, following six years at the New York Post. She has twice chaired the New York Film Critics Circle, where she has been a member since 1995. She has also written for The New York Times Magazine, O: The Oprah Magazine, The New York Observer, Parade, Variety, Marie Claire, The Huffington Post, More, Interview Magazine, The New York Times, The international Herald Tribune, Cosmopolitan and Self. In 1993, she earned an MFA in fiction from Columbia University. She lives in Hyde Park, New York, with her husband, son, daughter, three cats, one spaniel and a flock of wild turkeys. 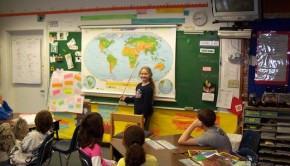 When I spoke to my daughter Lizzie’s fourth-grade class, I asked the kids what they wanted to be when they