Craig Pomranz – Craig is an internationally known singer/song-stylist, actor… and now author!  Made By Raffi is his first children’s book with illustrations by award-winning artist Margaret Chamberlain.  Craig received New York’s MAC Award for Best Male Vocalist in 2012, and songwriters Amanda McBroom (composer of “The Rose,”Bette Midler’s Golden Globe award winning song) and Michele Brourman (The Land Before Time) have written a song, specifically for the book called “Different.” Originally from St. Louis, Craig lives in New York City and travels the world performing in nightclubs and theatres.  His popular CDs “More Than A Seasonal Thing” and “My Heart Don’t Skip A Beat” can be heard on radio stations around the world and are available on iTunes and his website www.CraigPomranz.com. 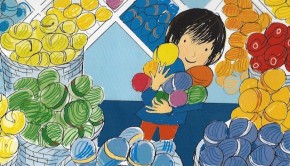 Craig Pomranz on MADE BY RAFFI

Made By Raffi, my children’s book with illustrator Margaret Chamberlain, was inspired by a true-life incident.  It is the story of a