MINECRAFT ATE MY BABY: Kristen Stone on Screen Time Rules in the Age of American Fascism

My child is obsessed with Minecraft, and I am trying not to panic*. It’s colonized his mind, it’s addictive, and his early childhood trauma has primed his brain for just such pleasures, I worry. My wife and I begrudgingly decide he can have a small, controlled amount of this new favorite thing, on the weekends.

One Saturday morning I ask him does he want to sit and draw with me.

Can I draw Minecraft? he asks. I had asked him to stop talking about Minecraft but maybe it’s all he’s been thinking about.

Sure, I say. I am after all not a complete ogre.

It’s like we’re in a movie, he tells me suddenly.
What would our movie be called?
I don’t know. It’s like a grownup movie. Because it’s kind of boring.

Yet, he seems content to sit here, unusually still. Where his leg touches mine, one of us or both of us is sweating. It’s August in Florida but he packs blankets around us.

He draws Minecraft and I make notes for an essay about Minecraft. (See? I am obsessing too.) We watch birds out the window.  We speculate about the crows and cardinals. His bony toes touching mine. A faux wood essential oil diffuser diffuses Peace and Tranquility, despite the fact that I don’t believe in that sort of thing.

Later that morning, we watch a livestream from Charlottesville, the early part of the Unite the Right Rally, before the violence. Since it is Saturday we do all our Saturday things too, laundry and housework. J helps me in his flighty way, punctuated with cartwheels and distraction, his attitude sweet with the promise of Minecraft later. When protesting clergy stare down homegrown militia, singing “This Little Light of Mine,” he comes running.

I know this song! He announces, and we sing along. Luckily, the feed cuts out before Deandre Harris is beaten, before Heather Heyer is run over. I refresh the news over and over, later, when he can’t see. 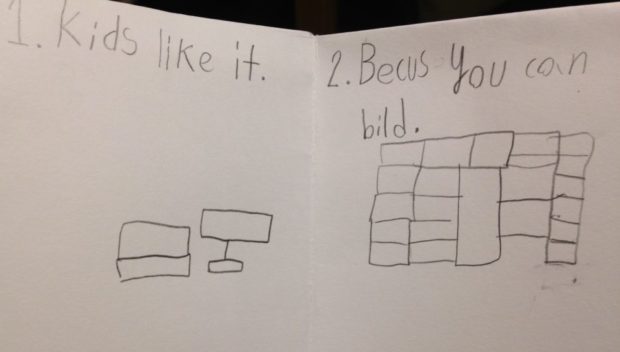 I was obsessive about things as a kid, too, some of them fantasy and some of them horror. I was obsessed, for instance, with germs; I washed and licked my hands compulsively for a time; I prayed without ceasing that my family would not die in a fire or car accident. (Some of these thoughts and behaviors, I know now, meet the criteria for obsessive-compulsive disorder.) Some of my obsessions were cute, though: memorizing the balcony scene from Romeo and Juliet; pretending to be Laura Ingalls or a student at Hogwarts.

The Song of the Lioness-inspired world I created with my seventh-grade best friend was the most elaborate of my obsessions–we wrote a novel about our fictional alter egos, made each other glitter-fat scrapbooks about our pet unicorns and magic powers. Her sweet, geeky dad would drive to my house with these offerings sometimes, still sticky with glue, sheepishly looking down at his giant sandals. We were twelve-year-old girls, shot through with the anxiety of ugliness, our weird bodies, our intense but toxic friendship, trapped in a preppy, religious school, and we created a world where we had agency, where we created the very laws of the universe.

Of course we did.

We sublimate our fears into fantasy. As a child, I knew the world was dangerous, I had a deep and abiding anxiety about safety; but it was misdirected into fearing obscure food-borne illnesses and house fires. Now, I channel my fears into obsessing about my personal choices (the fantasy of control). How much sugar my son should be allowed, how much screen time. I know these concerns are a mark of privilege; they provide a convenient distraction from the burning world with its many, specific, urgent concerns.

I do not want my son to feel the world is burning; the world is burning. When I was his age, I worried all the time. For a variety of reasons, I felt profoundly unsafe. I want him to feel safe and secure so that he can help others and speak up against injustice. I want him to cry for dead butterflies but I don’t want him to have to grieve the dying earth. I want him to understand racism and privilege and the abundant, glorious alternatives to toxic masculinity. It is complicated. I am tired. Sometimes, I just want him to chill out for a few minutes, and this is when I let him play Minecraft. So I can work, organize–and obsessively refresh my newsfeed.

[Author’s note: I began this essay in mid-August, the weekend of the deadly “Unite the Right” white supremacist rally in Charlottesville, Virginia. The next week our community found out that Richard Spencer’s National Policy Institute had requested to speak at the University of Florida. Despite massive community organizing to attempt to stop the event, UF went forward with hosting Spencer. The resistance on the day of the event was loud, large, and overwhelmingly peaceful. Spencer’s supporters were wildly outnumbered by protestors, and his talk ended early because our community made it clear we didn’t want to hear what he had to say.]

*After reviewing this essay, MUTHA Magazine editor Meg Lemke directed me to the work of Kurt Squire, on video games in education, and I learned more about the skills Minecraft (and other “sandbox”) games can teach, which makes me like the game even more.

Ezra Stone is a writer and social worker living in Gainesville, Florida. They are the author of THAT WHICH GIRLS CONJURE WILL HELP THEM SURVIVE (Guillotine, 2018), Domestication Handbook (Rogue Factorial, 2012) and self/help/work/book//The Story of Ruth and Eliza (Birds of Lace, 2014).

Here We Go Again: A Comic →